A case in point is the New York City Department of Education, which has been working on sustainability and energy conservation since about 2008. The department accounts for 25 percent of the energy consumed by municipal buildings in the city. For fiscal years from 2008 to 2012 (July through June), energy use across the department dropped about 10 percent, going from 6.644 billion MBTUs to 5.977 billion MBTUs. Although the data isn't perfect — for example, it includes some estimated readings — the numbers show a good sized drop in energy use despite hefty increases in plug loads and a warm early summer this year.

That reduction is a key element of the Department's work under PLaNYC, set by Mayor Michael Bloomberg in 2007. One goal of the Plan is to reduce carbon emissions from municipal buildings by 30 percent between 2007 and 2017. "We're making progress to the 30 percent reduction," says John Shea, chief executive officer with the division of school facilities.

While some progress comes from investments in equipment, such as occupancy sensors, some also results from training custodians and building managers, Shea says. Then they are more likely to, for instance, adjust the heating system to run efficiently.

Each custodian is instructed to establish an account and use it to track energy use. "With Portfolio Manager, we can manipulate the data and look at it in different ways," such as to measure the potential impact of an energy-saving project. "Then it's easier for the city to buy off on it," Shea says.

Like their counterparts in New York, Decatur County Community Schools in Greensburg, Ind., has cut energy use significantly. The district cut energy use across its 365,000 square feet of space by about 60 percent between 2008 and 2011, saving more than $700,000 annually, says Don Lewellyn, maintenance director and energy coordinator. "We've saved a ton of money, and that's with increasing (energy) rates."

Much of the savings have come from modifying the schedules for lighting and HVAC equipment, Lewellyn says. "If the kids aren't there, we don't use it," he says. Motion sensors and upgraded gym lighting contributed as well.

Portfolio Manager has helped measure performance before and after the changes, Lewellyn says. "It's a very good benchmarking tool," he says.

Along with tracking current energy use, Portfolio Manager can help owners and managers budget future energy costs, says John D'Angelo, senior director for facilities with Cleveland Clinic. The Clinic has more than 200 facilities throughout the US, totaling about 24 million square feet, ranging from high-intensity health care areas to data centers and administrative areas.

Since becoming an Energy Star partner in 2008, Cleveland Clinic has cut 25 percent from the organization's energy use index, which is calculated by dividing a facility's energy use, measured in 1,000 BTUs (kBTUs), by its square footage. It will avoid more than $25 million in energy costs this year.

In addition to relying on it as a repository of energy data, D'Angelo uses Portfolio Manager to budget for the future. He'll transfer information from Portfolio Manager to a spreadsheet, then enter projected utility rates and estimate usage based on available weather information. By starting with several years of actual energy use data and including estimated energy costs, D'Angelo can significantly boost the budget's accuracy. "The more accurate, the less surprises," D'Angelo says. 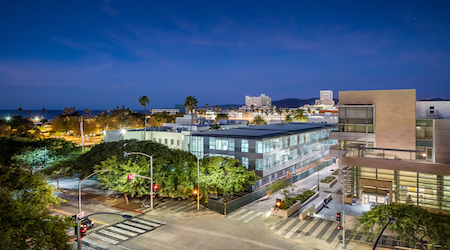