Iconic against the Midtown Manhattan skyline is the Empire State Building, the spire glowing in the colors of the season. On a May night in 2012, the Empire State Building glowed green in honor of the Rocky Mountain Institute (RMI), which championed deep energy retrofits to the building, saving 38 percent of building energy for an annual cost savings of $4.4 million.

That aggressive energy-saving strategy reflects the sort of thinking required to move existing buildings in the direction of zero energy buildings. The U.S. Department of Energy defines a zero energy building (ZEB) as one that produces enough renewable energy (electricity, fuel combustion) to meet its own annual energy consumption requirements. The building terms “net zero energy” and “zero net energy” are synonymous and are broadly used in the industry. Energy consumption is averaged over a one-year period. The measurement of energy consumed and energy exported is highly dependent on the site boundary, which could encompass a single building or a cluster of buildings. Not just a building, but a campus, a portfolio, or a community can be zero energy.

Title IV of the Energy Independence and Security Act draws a line in the sand, challenging the building industry — which accounts for 38 percent of total U.S. energy consumption, according to DOE — to build net-zero only buildings after 2025 and retrofit pre-2025 buildings to net-zero by 2050. California, the world’s environmental leader, has set more aggressive goals, requiring all new residential buildings to be ZNE by 2020, new commercial buildings to be ZNE by 2030, and 50 percent of existing commercial buildings retrofit to ZNE by 2030. Both the federal government and California acknowledge that the zero-net energy goals are ambitious, pointing to the elimination of fossil fuel combustion for generation of heat and hot water as very difficult to implement.

Despite these difficulties, leadership at the municipal level is emerging with cities actively pursuing incremental improvements in the energy performance of commercial buildings rather than jumping directly into ZEB requirements. Municipal leadership is exemplified by the Global Covenant of Mayors, a compact between thousands of cities globally, to set mitigation commitments, report activities, and share best practices on a common platform, addressing building energy use, improving building codes, establishing developer incentives and property assessed clean energy (PACE) programs, and promoting sub-metering, according to the Center for Energy and Climate Solutions.

For benchmarking purposes, the U.S. Environmental Protection Agency’s Energy Star certification program provides a sliding scale of energy performance data, comparing building efficiency, nationally. Energy Star says that it does not peg building ratings against the net-zero standard; however, the program is designed such that as building technologies improve over time, the Energy Star building performance standard will approach the net-zero benchmark. Today, by focusing on relative performance of existing buildings, Energy Star supports a platform for understanding the real-time value of energy improvement initiatives.

Currently, 43 states and territories have adopted energy codes for commercial buildings, according to DOE. ASHRAE 90.1-2013 has been adopted by DOE as the national model. (DOE is currently determining whether to adopt the recently released ASHRAE 90.1-2016 guidelines). Leading the nation is California, where the California Energy Commission establishes tiered state energy efficiency standards annually, which are enforced at the local level during construction permitting.  Approved permits are uploaded to a centralized registry that can be accessed by authorized project team members and all enforcement agencies, including the California Energy Commission. 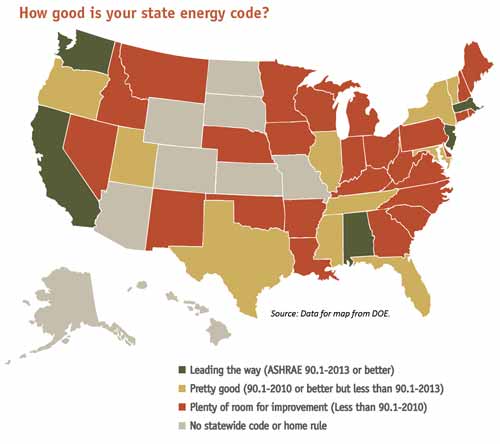 Beyond Smart Grid: New Terminology, Focus on Interoperability and Data