By Lindsay Audin   Energy Efficiency
OTHER PARTS OF THIS ARTICLEPt. 1: Electric Bills May Rise With New Regulations On Coal-Fired Power PlantsPt. 2: How Will Electric Utilities Respond To New Rules On Carbon Emissions?Pt. 3: This PagePt. 4: Look Closely: Will New Regulations Will Affect Your Electric Power Pricing?Pt. 5: How To Soften Electric Rate Increases From New Rules On Coal Plant Emissions

If carbon emission rules are also upheld, some coal-fired plants may need to shut down either permanently or for extended periods while being retrofitted or replaced. That could push up retail power prices in states heavily dependent on them (see the map below) by 10 to 30 percent. A study by Purdue University found that rates in its home state of Indiana, which is 84 percent dependent on coal-fired power, may rise by 32 percent over the next decade.

Due to their low use of coal, states in the Northeast and on the West Coast are unlikely to feel the same pinch. As a result of the recession, some industrialized states presently have excess generating capacity, so retirement of a few coal-fired plants may not yield significant price hikes in the short term. The low price of natural gas (relative to coal) has already pushed operation of some coal-fired plants onto the back burner.

Even in states that are otherwise not heavy coal users, however, some customers are served by municipal or co-op utilities heavily dependent on a few coal-fired plants. In Kentucky (90 percent coal-dependent), nine municipalities are already looking to replace their 50-year supplier of power due to price increases from coal retirements or retrofits set to start in five years. According to the American Public Power Association, some small utilities lack the financial means to retrofit their plants. Customers taking power from co-ops supplied by the Tennessee Valley Authority (TVA) recently learned it is shutting down 18 of its coal-fired plants. To keep the lights on, some utilities may instead need to buy more expensive power from regional grids.

With regard to possible carbon limits on existing plants, Bob Ray, CEO of Flint Energies (which supplies co-ops in Georgia), stated at a recent conference that "we're anticipating it's going to be very, very negative and very, very costly." 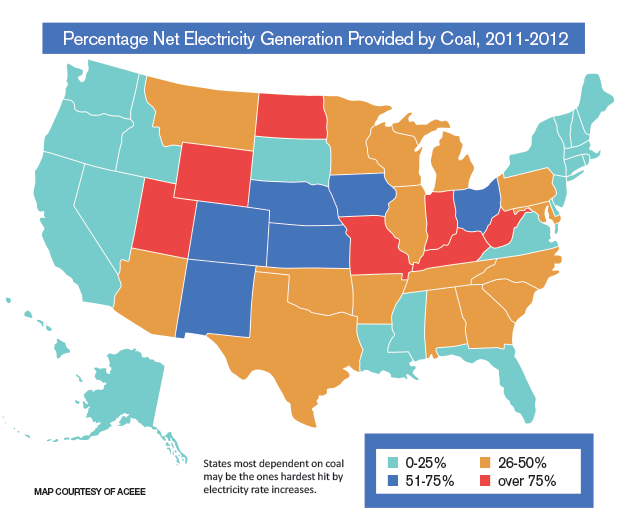