At Western Michigan University, LEED-EBOM certification is a unifying goal that gets a large in-house FM staff moving in the direction of sustainability.

"We're using LEED-EBOM as the engine that links that train together," says Peter Strazdas, associate vice president for facilities management at Western Michigan University. "We need to focus on our existing buildings, and change our way of thinking to make concrete policy changes. And LEED-EBOM forces you to go through the process of measuring things, so there's more accountability."

The university's 200,000-square-foot College of Health and Human Services building achieved Gold certification last fall. The biggest hurdle Strazdas had to overcome was resistance from his own staff, who were skeptical of the value of such an initiative.

"Anything new and people are often gun shy," says Strazdas. "But now, I've got people over my entire FM organization whose batteries are recharged."

LEED certification for the College of Health and Human Services building is a carrot to lead the organization through a long list of sustainable operations and maintenance goals for the university's existing buildings. Strazdas says the benefit of fulfilling certification requirements was that it forced his facilities organization to standardize processes.

"Codifying our procedures brings a level of consistency," he says. "If you don't have these things in writing, and you're a large organization, people will do things different ways. LEED forced us to figure out our own best practices, which evolved throughout the certification process."

"LEED is a hub around which all our sustainable initiatives circle," says Peggy Sheehan, assistant property manager for Cushman & Wakefield. "It provides benchmarking for what is attainable and helps us refine what we're already doing."

While LEED provided that benefit for the property managers to streamline their processes, the actual reason for certification was simply that the building's owner, Dutch insurance giant AEGON, wanted it. "They wanted to be a good corporate citizen, but they also realized tenants are demanding buildings that are certified," says Phil Rapoport, general manager for Cushman & Wakefield.

The Gold certification the building earned is proof of sustainable operations in action, and in the multitenant office building market, this is one of the most oft-cited reasons for going through the certification process. "LEED-EBOM certification is third-party, independent verification that you're doing things correctly," says Skodowski of Transwestern. "If you're a tenant and you're looking for a lease, and you see a plaque vs. someone who just says they're doing things correctly, you'll always pick the one with the plaque."

At the Christ Hospital in Cincinnati, Ohio, the first hospital certified under any of the four versions of the LEED-EB (or EBOM) rating systems since its release in 2003, the board of directors made certification a goal because they wanted proof of their environmental initiatives. Specifically, they wanted a way to illustrate their energy savings efforts to the community without having to talk about kilowatt-hours and other more technical terms.

Facility managers had been working on energy efficiency projects for years, says Rick Perkinson, divisional director of facilities management. But pulling all the organization's sustainable goals under the umbrella of LEED certification gave the organization quite the feather in its cap. And being the first hospital to be certified has garnered a lot of press.

One of the underlying themes and a common thread throughout these stories, indeed practically any LEED certification story, is the idea of verification and justification. "Facility managers want proof that what they're doing is successful, and they're learning to justify their existence using LEED-EBOM certification as a mechanism to show what they've done," says Skodowski. "Certification is tangible, something they can point to."

That is one of the many reasons Skodowski has led Transwestern's own LEED-EBOM initiatives, so far certifying 25 projects comprising more than 9.5 million square feet. 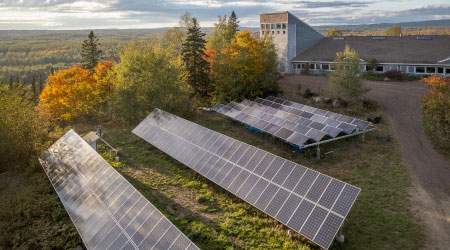