To prevent exterior air from entering a building’s interior, technicians typically balance building mechanical systems to create a positive pressure. Although this practice is common in the building industry, openings in the envelope can allow unexpected and significant amounts of air to leave the building, significantly increasing heating and cooling loads.

Common paths of air leaks include around and through windows and doors, through gaps at transitions between walls and floor or roof levels, through transitions in cladding, and through structural wall penetrations.

Moisture within building-envelope components, such as insulation, not only leads to premature deterioration of the material. It also decreases the R-value and the building’s overall thermal efficiency. Various forms of moisture, including condensation and direct water leaks, can affect envelopes.

Due to budget constraints and the “out of sight, out of mind” approach, roofs are one of the most commonly neglected components of building envelopes. But roofs also are very important for preventing moisture from entering the building and enhancing thermal efficiency. Moisture from condensation within the roof section or bulk water migrating below the membrane decreases the R-value of roof insulation. Improper or unreliable detailing typically causes most water migration below a roof membrane.

Building Envelope: Keep Water Out of the Roof 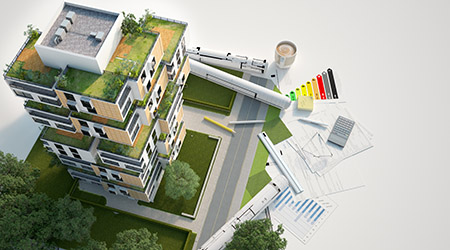