Elevators See Major Technology Advances in the Wake of Disasters 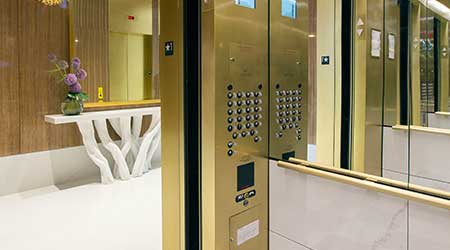 At 181 Fremont in San Francisco, 14 of 17 elevators have been equipped with occupant evacuation operation technology.

Every time we turn on the news we see the devastation caused by natural disasters, whether it is an earthquake, blizzard, hurricane, or other extreme weather event. Sometimes, facility managers will know far in advance that a threat is heading their way; but other times, as was the case in the recent tornado that hit parts of Alabama and Georgia, ten minutes is all the warning they receive.

In either case, preparation, training, and practice can be the difference between life and death for building occupants. Is your facility prepared?

As our cities grow, so too have our buildings. Today, billions of people use elevators daily and by 2050, the number is expected to triple as population booms in urban centers. Technological and engineering advances have led to the construction of larger and taller buildings to meet the world’s growing need. Even in the best of times, it can be difficult to effectively transport building occupants. And if a disaster strikes — natural or otherwise — occupants will be unable to evacuate if the building and the facility manager are not well prepared.

It will continue to be increasingly important for facility managers to recognize the role elevators can play in the safe evacuation of building occupants. Preventive maintenance to keep elevators up to code, combined with a responsible egress plan and clear communication, will save lives in an extreme event.

Facility managers are very familiar with building codes developed by the International Code Council (ICC), such as the International Building Code (IBC), but may not be as familiar with the codes for elevator and escalator safety developed by the American Society of Mechanical Engineers (ASME). ASME A17.1/CSA B44 is the primary code in place for new product elevator/escalator designs and installation. It is used widely throughout North America and undergoes updates every three years by a panel of experienced experts with representation across various aspects of the elevator industry. While building owners are not responsible for enforcing these codes — the authority having jurisdiction oversees that — they still must comply with the elevator safety codes enforced in their area.

Over the past several years, the codes have evolved to better address how elevators function during disasters.  While seismic requirements and firefighters’ emergency operation have been part of the code for many years, these requirements are continuously reviewed and updated as needed. In addition, new requirements have been added, or are being developed, to provide for occupant egress in emergencies and for operation during extreme weather events.  For example, ASME A17.1 now addresses occupant evacuation operation technology, flood detection technologies, and back-up power systems, to name a few.

Unfortunately, it often takes a true tragedy to inspire innovation. In the aftermath of 9/11, it was obvious that more lives could have been saved if occupant egress was more efficient and elevators were part of the solution. Many building code changes have been prompted by lessons learned from that tragedy, including some hardening of the buildings and widening of stairwells. The reality is you cannot build a building that can withstand any possible threat. But what if you could safely use the elevator to evacuate people efficiently? That is where occupant evacuation operation technology comes in. This technology enables passengers to simply walk to the floor lobby, catch the designated elevator to a safer floor, and from there make an efficient exit, freeing up the elevator for other occupants to use.

The idea is not to evacuate every occupant via the elevator, but to have more options for the occupants of the floor(s) of a building most at risk. This important game-changing innovation is already being used. At 181 Fremont in San Francisco, 14 of 17 elevators have been equipped with this technology by NEII member, ThyssenKrupp Elevator Corporation. Many other market leaders utilize similar technologies and buildings are currently being constructed with occupant evacuation operation capabilities to maximize safety.

Advances in building design and elevator technology and changes to the codes help ensure that elevators can continue to operate in fire emergencies, provided the elevators are not exposed to the fire hazard. These changes include provisions to protect against the intrusion of smoke, fire and water into the hoistway, as well as providing for emergency power to the elevators.  The building codes require protected elevator lobbies in which real-time messaging displays provide information, such as availability and estimated time of the elevator car arrival, which the occupants can use to determine their best means of evacuation.

Elevator users in North America are familiar with signs posted in all elevator lobbies warning the public not to use elevators in case of a fire. Those signs had been mandated by the ASME A17.1/CSA B44 Safety Codes for Elevators and Escalators for years. With new technologies and safety codes that support new innovations, property managers will need to reeducate their tenants that elevators may be safe to use in some emergencies, once this technology becomes more prevalent.

In response to flooding emergencies, such as Hurricane Sandy in the Northeast and Hurricane Harvey in Houston, there are also enhancements for operation of elevators in flood zones.  ASME and IBC reference ASCE24 which has performance-based language that prohibits elevators from descending into floodwaters. One of the ASME working groups in currently developing a proposal to add more prescriptive requirements to the code. Care must be taken to ensure that any new provisions work effectively with the other systems currently in place (such as firefighters’ emergency operations, occupant evacuation operation, and seismic operation).

In addition, standby or emergency power systems are important safety features, which allow the elevators to be used for evacuation or to fight the fire. Standby power also ensures that the communication systems in the elevators remain operational.

Most new innovations included in the safety code only apply to new elevators being installed and only when the authority having jurisdiction adopts an updated version of the code.  Elevators typically last 25 to 30 years before they are updated and some may be older than that. Unless the local authority requires upgrading older elevators to add these new safety features, they may not be present on the elevators in any given building.

While the innovation of elevator manufacturers and the development of strong safety codes have been tremendously impactful in improving the safety of elevators in emergencies, there is still much that facility managers must do. The facility manager should be familiar with the specifications of the building transportation systems and keep in mind the new safety features available when it is time to upgrade the equipment. The facility manager should develop an emergency plan for the building, including how the elevators might be used in an emergency, and then provide training for building occupants.

Kevin Brinkman is the vice president of codes and safety at the National Elevator Industry, Inc., the national trade association of the building transportation industry. The primary mission of NEIId is to drive the adoption of model codes and responsible policies across North America, promote safety for passengers and industry professionals, and advance innovation and performance. NEII supports and advocates for codes in several ways, including actively participating on code development committees, like the ASME, ICC, and NFPA, to ensure the harmonization and consistency between the building codes and building transportation codes. This is particularly important for issues such as seismic safety that are addressed in both the building and elevator codes.