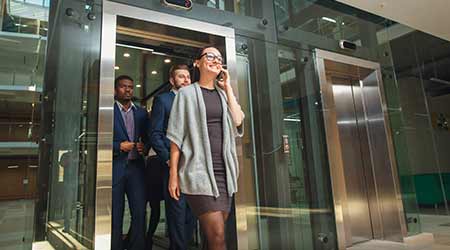 Nationally, elevators take billions of trips moving billions of people each year, but on average there are only about 27 deaths that occur, according to estimates from the U.S. Bureau of Labor Statistics and the Consumer Product Safety Commission. Although the percentage of deaths relative to the number of trips is very small, even one is too many. And fatalities are not the whole story. There are a number of injuries, minor or severe, that occur and often go unreported. Many elevator-related accidents are avoidable with greater public awareness and thorough elevator inspections.

The most common elevator injury is someone being struck by a closing elevator door. This is called a door strike injury in the industry, and they generally occur while someone is entering the elevator. The elevator doors are required to close at a rate that would make injury unlikely, but unfortunately this is something that many elevator inspectors miss or do not inspect for because they take for granted that the doors are operating within in specifications and code.

Many people do not realize that there are two doors in the elevator — an inside door that is seen when inside the elevator car (called the car door) and a landing door that is seen when waiting for the elevator (called the landing door). The car door opens both doors. As the car door opens both itself and the landing door, the sensor that reopens the door — if someone is in front of it — is attached to the car door, and the landing door is “blind” — it cannot sense when someone is in front of it. As a person enters an elevator they pass the blind landing door first, which could mean the doors don’t see them in time to reopen and end up striking them. If the door’s closing force or speed is too high when it strikes a person, the resulting injury could be severe. Door strikes are a common liability item for building owners and can lead to lawsuits.

Scheduling a thorough and conscientious inspection of a building’s elevators is the best way to prevent this sort of accident from occurring. The inspector should be testing the door force and kinetic energy with each inspection. Some inspectors tend to gloss over kinetic energy because they are not comfortable with the formula. However, these should be inspected as often as the jurisdiction requires and the code recommends inspection of this operation twice a year.

Another common issue is the tripping hazard related to the “leveling” of an elevator. Elevators can get out of level from regular use. According to current regulations, an elevator is allowed to have up to 1 1/4-inch gap between the car sill and the landing sill. The elevator is also allowed to be up to a half inch out of level relative to the landing sill. With the gap between sills and the difference in level, people can trip and fall while they are getting on or off the elevator. Heels on shoes could also be caught in these gaps. If leveling is more than a half inch out of level, the elevator is in violation of code, and facility managers need to arrange to have the elevator adjusted.

Another safety concern is related to being trapped in an elevator, also known as an entrapment. All buildings are required to have an emergency evacuation procedure, so people can be safely evacuated from a stopped elevator, even if it is between floors.

When facility managers are not trained — training is required by code — or do know the proper procedure for evacuating trapped passengers in an elevator, fatal mistakes can occur. If an elevator is above a landing and someone tries to get out, they tend to lose their balance and fall back toward the elevator, slipping underneath and into the hoist way. For the riding public, this is the most common elevator accident resulting in death. Training is required when rescuing someone from an elevator. In order to prevent a fatal or serious accident in a nonfunctional elevator, a few recommendations should be followed:

1. Have an emergency evacuation plan in place.

2. Advise your building’s workers not to assist in an evacuation unless they’ve been formally trained on evacuation procedures and continue to go through training on an annual basis.

3. If people  are trapped in an elevator, tell them to stay in the elevator until emergency crews come to help. They should not try to get out on their own.

Similar to elevators, the misuse of escalators also leads to many accidents. People often misuse escalators due to what they see in online videos. Doing tricks on escalators leads to a lot of injuries. Individuals don’t consider that these are machines that will keep rolling even if their stunt or misuse goes wrong. Children and adults can lose fingers or toes, fall down the steps, or even fall over the handrails when riding escalators incorrectly.

Never walk or run the opposite direction of operation, sit on steps, ride without shoes on, drag your feet along the edge, or use carts or strollers on escalators. The steps are sharp and higher than stair steps, the handrails are shorter than stair handrails, and the unit needs minimum gaps for operation. If there is an emergency on an escalator, there are red stop buttons located at both the top and bottom of the unit to stop the escalator and prevent further damage or injury.

While elevators and escalators are very safe when routinely inspected and maintained, problems and injuries can arise. That is why it is crucial for building owners to adhere to jurisdictional guidelines, consult with and have a thorough inspector, and finally have a plan in place if something does go wrong.