Keeping Up To Avoid Going Down

Elevator problems aren’t always apparent, but being aware of common ones can help keep elevators operational and determine when it’s time for modernization.

But even with the most comprehensive maintenance program, all elevator systems will eventually need to be modernized or replaced. Postponing modernization too long will result in the same detrimental effects that result from ignoring maintenance requirements. Unfortunately, many do not recognize the symptoms of a declining system early enough to avoid a crisis.

Some elevator problems, such as system downtime and slow operation, are obvious. Others, such as high energy use and electrical noise generation, are not. Their impact, however, may be felt throughout the entire building. Understanding the nature and sources of — and solutions to — common elevator problems can help facility executives find the most cost-effective ways to keep elevators performing well.

Consider vandalism. Elevators seem to be a natural target of vandals. While it is impossible to prevent all vandalism in elevators, there are several steps to reduce the frequency and impact of vandalism. For example, installing vandal-resistant interiors and control panels in the elevator cabs will reduce the number of incidents and costs to repair damage. It’s also important to make certain that the elevator control system is operating properly. Long wait times and long travel times can produce frustration that spurs incidents of vandalism.

Long wait times are an inconvenience for building occupants, and they can also be a warning that the elevator control system is developing problems.

Wait times and elevator speed should be checked on a regular basis. Time how long it takes to go from the bottom floor to the top floor. Measure the time spent waiting for an elevator during peak and off-peak periods. Record the times and compare them to a baseline for the elevator, or to the manufacturer’s specifications for that type of application.

Long wait times and slow performance may be caused by a malfunction as simple as a defective relay, or problems may be caused by the age and overall condition of the elevator. While repairs can improve performance in some cases, elevators that use old mechanical relay control systems may simply need a new control system. Mechanical relay-based systems are slow by today’s standards, and little can be done to improve their performance. Upgrading to a new microprocessor-based control system reduces average wait time by 50 percent. When coupled with a new drive system, the speed of the elevator can be increased by an average of 40 percent.

Replacing the relay-based system, although costly, will at some point become a necessity. Microprocessor control systems for elevators became the standard for new construction and system modernization nearly 20 years ago. Parts for older relay-based systems are getting harder to find. Equally difficult is finding personnel who understand and can service these types of systems. Fewer and fewer elevator manufacturers and service companies support the older systems. As a result, the maintenance cost and downtime is increasing because it is difficult to obtain replacement parts.
If system performance is already a problem, it is far better for facility executives to plan for replacement now rather than have their hand forced some time in the future.

A common problem with elevator installations is the overheating of the drive and control system. In electrical traction elevators, the equipment is typically located in a penthouse above the building’s roof. The penthouse is seldom heated or cooled. Ventilation is provided by louvers mounted on the walls of the penthouse, near the roof of the building.

Attempting to cool the elevator equipment with outdoor air also introduces other causes of frequent breakdowns: dirt and humidity. Outside ventilation air is rarely filtered. It carries with it large volumes of dust and dirt that are deposited on equipment. Dirt can interfere with the contacts in the control system and can act as a layer of insulation, further increasing the chances of overheating. Humidity accelerates the corrosion of contacts.

The best solution to this problem is to install a dedicated cooling system for the elevator equipment room. The system should be designed to keep the temperature and humidity within the recommendations of the elevator manufacturer. All openings to the outside should be sealed to help limit the dust and dirt that can enter the equipment room.

Not all common elevator problems are as obvious as slow response time or frequent breakdowns. For example, elevators are a fairly large user of energy within a building, yet without a separate meter to break out the elevator’s energy use, few realize just how much energy elevators actually consume. Over the course of a year, the energy used by a building’s elevators, particularly a facility with a high traffic flow, can be significant.

New generation drive and control systems operate more efficiently than older systems. Older motor-generator sets, or DC drives, while durable, were not very energy efficient. The typical new generation system can provide quicker, more reliable service, while reducing energy use by as much as 74 percent. While the energy savings alone cannot be used to justify the cost of modernizing the elevator system, it will provide an additional incentive for an upgrade.

Another problem with older elevators is their low power factor. Rotating machinery, such as the motors that drive elevators, are inductive loads. Inductive loads require a magnetizing current to produce the magnetic field required to drive the equipment. While it is a necessary component of the power supplied to the equipment and does add to the current drawn by the equipment, it does not produce any useful work. The power factor of the circuit is defined as the ratio of the current that produces useful work to the total current drawn in the circuit. It can range between zero and one, but typically falls in the range of 0.75 to 0.95.

Power factor is important for two reasons. First, even though the magnetizing current produces no useful work, it is a current that must be carried by the circuit feeding the elevator machinery. The higher the magnetizing current, the less the circuit’s capacity to provide current that does produce useful work. Low power factor can result in overloading circuits and having to upgrade system power lines.

Buildings are filled with computerized equipment that is sensitive to the quality of power. Any modification to the system voltage or the shape of the wave form of the alternating current can interfere with the operation of the equipment or cause damage.

Harmonic distortions can disrupt the operation of sensitive electronic equipment. If other motors are connected to the circuit, they can suffer from overheating, leading to early failure.

If a facility has a history of motor failures and problems with the operation of sensitive electronic equipment, conduct a power quality survey to examine the types of distortions present within the facility’s electrical distribution system and identify their sources. If the facility has an older elevator system, chances are that it is a major source of the distortion.

One of the most common symptoms of a system in need of overhaul or modernization is increasing service call frequencies. As components wear and age, they more readily go out of adjustment, either shutting down the system or interfering with its operation.

This is particularly true with door operators. Door operators undergo tremendous wear and tear in daily operation. Each time the elevator stops, the door operators are activated at least two times, more frequently if occupants manually hold the doors open. Some elevator maintenance companies report that nearly 75 percent of their service calls are for malfunctioning door operators.

Doors aren’t the only source of frequent problems. It is important to track the frequency and costs of all problems. Rising service call frequencies, increasing maintenance costs, rising injury reports — all serve as early warning signs that problems are increasing. 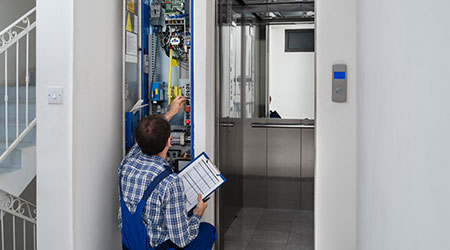