Peter Strazdas: BIM Is The Future of FM


By Greg Zimmerman, Executive Editor
Educational Facilities
OTHER PARTS OF THIS ARTICLEPt. 1: This Page

Building information modeling (BIM) is becoming more mainstream — there’s little question about that. But conventional wisdom is that BIM is still a tool mostly for architects and designers working on new construction projects. Peter Strazdas is turning that notion on its head.

Strazdas says he budgeted about $50,000 for the entire two-year project. Six to 10 students worked on the models at various times over the course of the project, and were paid $8 to $9 per hour. Some were able to work the project into class assignments and earn credit. The project required the students to take existing CAD drawings for each building, supplement that data with actual on-site measurements, and plug all the information into the BIM software. According to Strazdas, the resulting models are 200-level models on the five-level scale (100 to 500) that specifies the amount of information included in a BIM. This scale is spelled out in the American Institute of Architects’ E202 document.

But Strazdas says he expects to build the models with much more information on a systematic basis as time goes on. “BIM is more a process than a tool,” he says. “It’s a bottomless filing cabinet for information.”

In the meantime, Strazdas says the project is already bearing fruit in several ways. The first is that the models help non-architectural and engineering folks better visualize space. Strazdas says that his team does as many as 350 small renovation projects per year. Now, with the BIMs, his project managers can sit down with, say, the head of the English department and, with a 3D representation of the space, move walls around and help him better understand not only what’s possible and cost-effective, but also what it is he really needs.

Secondly, on bigger renovation projects or additions, Strazdas can deliver the BIM to the architect to dramatically speed up the design time required. This is the case on a $2 million, 30,000-square-foot addition project currently underway. Strazdas says the architect was asked to raise the level of the model from 200 to 300, and then use that as the basis for designing the addition.

A third way Strazdas is using the models is by dumping them into his energy modeling software to look for opportunities to save energy. “We can do a lot of ‘what ifs’ with our energy model,” he says. “It’s much easier than starting from scratch each time. It’s leveraging work we’ve already done, sprinkling in a little more work, and ultimately saving a lot of money.”

The next step in the BIM project, which has just begun, is to go building by building and add symbols for pieces of equipment that require regular maintenance, such as chillers, pumps, and air handlers. The team is then attaching data to those symbols, including a PDF of the maintenance manual, serial numbers, phone numbers for contractors or manufacturers, and other information. “It’s like moving from a DOS operating system to Windows,” Strazdas says. “You can just click on the symbol, and you have all this information attached to the graphics.” One key to this, though, is to make sure all the naming conventions for files, materials and equipment are the same. Consistency is the name of the game, says Strazdas.

Eventually, Strazdas envisions tying all the information in the BIMs to his computerized maintenance management system (CMMS), but right now, that would require a middleware software package. And so Strazdas has begun exploring options to see how tying BIMs to CMMS might work and what the advantages might be.

That’s to say, Strazdas is betting big that BIM is here to stay. “Talk to me in five years, and we’ll have really rich BIMs,” he says. “We own and operate our buildings for 50 years or more, and approximately 90 percent of the costs occur after construction. We need to make smarter decisions with those assets and to have access to real-time information about them. BIM is how we access and maintain that information.” 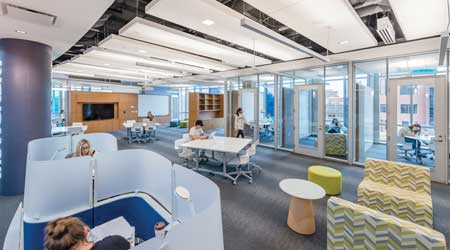 Smart Buildings: Why the Latest Tech is Critical on Campus