Design & Construction
OTHER PARTS OF THIS ARTICLEPt. 1: This PagePt. 2: About the Metal Building Manufacturers Association

Facility executives know the importance of using both energy and money prudently, even when the economy is in better shape than it is now. After all, using resources and money wisely contributes both to the bottom line and a more livable planet. Serving this need, metal buildings are cost-competitive, both initially and over the long term, and they offer an environmentally responsible building option.

Moreover, metal building and construction has advanced dramatically since it was introduced in the commercial sector shortly after World War II, says Phil Raimondo, MBMA chairman with the Metal Building Manufacturers Association (MBMA). Early on, most metal buildings were fairly basic industrial or warehouse facilities.

“Now, just about any application can be suitable for metal,” Raimondo says. In fact, metal buildings today work for a variety of applications, including schools, fire stations, car dealerships, churches, banks and airport hangars, among others.

Most metal buildings are low-rise structures and can achieve significantly wide clear space and height. In fact, they account for about 40 percent of low-rise, non-residential buildings, says Charles Praeger, assistant general manager with MBMA. Such buildings always include steel frames and metal roofing.

At the same time, metal facilities can take on a range of architectural styles, and many incorporate wall design elements like brick facades or banks of windows.

“Metal buildings are versatile and offer design flexibility,” Praeger says. “They can be designed to look good, use energy wisely and comply with local regulations.”

Research is underway to improve the body of knowledge regarding sound, efficient design of metal building systems, says Lee Shoemaker, director of research and engineering. For instance, current initiatives are focused on wind uplift on low-rise structures, seismic design, and the behavior of cold formed steel framing, among other projects.

As a result, the term “pre-engineered,” which has been frequently used with metal buildings, really isn’t accurate, says Shoemaker. Today, most metal buildings are custom-designed to an owner’s specifications and needs, as well as to use resources most efficiently.

For example, metal building engineers use software to optimize the weight of the steel in the building they’re designing. They will place more steel in areas of high stress, and less elsewhere, so that the material is used most efficiently. This also helps keep costs under control.

The components are fabricated in a factory, including welding plates for rafters and columns and cold-formed steel secondary framing. This is done under strict quality control. “We design them for use and can engineer them to a specific need,” says Raimondo. In fact, the process can be controlled from start to finish, including the design and engineering, as well as detailing and manufacturing.

The metal building components are then transported to the building site, where they’re bolted together. Because they have been manufactured, sized and detailed to specifications, the pieces fit together precisely. As a result, the construction process moves quickly. That reduces costs.

The construction of a metal building tends to move along roughly 30 percent more quickly than with site-built construction, say experts. The process can be considered “fast-track” or design/build construction. As a result, a building project can be underway quickly once approval is secured or financing obtained.

Consider this: the West Peculiar Fire District in Peculiar, Mo., built a new metal fire and EMS station in just four months, two months ahead of the initial schedule, says Praeger. What’s more, the 13,700 square-foot facility was constructed for less than $1 million, at about $71 per square foot.

Metal buildings have become even more economical over the past year, given the drop in the price of steel, which is the most significant raw material used in the construction of metal buildings. Prices for medium steel sections, for instance, have plummeted from a high of $1,234 per metric ton in July of 2008 to $780 just six months later, reports MEPS International, LTD, a consulting firm based in the United Kingdom.

Another factor that can reduce cost, Praeger says, is that just one company is involved in the design and manufacture of the metal building system. Should facility executives need to make changes, they just have to work with one company to handle the situation.

Metal buildings’ longevity helps conserve resources. After all, the longer a building remains functional, the fewer resources that need to be used to replace it.

What’s more, metal buildings can be made from recycled material. In fact, steel is the most recycled building material available, Praeger says.

“Steel is 100 percent recyclable,” Raimondo says. “At the end of a building’s life, you can take it apart and recycle it into another building or a car.”

The environmental responsibility of metal buildings extends to the way they use energy. That’s important, given that commercial buildings accounted for 18 percent of primary energy use within the U.S. in 2008, according to the Department of Energy’s Buildings Energy Data Book for 2008.

The metal building industry has developed several methods for insulating buildings and boosting thermal efficiency, Shoemaker says. One result is that factory-insulated metal wall panels can be used to create a facility that uses energy efficiently. These panels boast R-values that can range from R-16 to about R-32.

Additionally, there have been recent advances in what are known as sandwich panels, or two panels of metal with insulation in between them, Raimondo says. These enable a metal building to be used for cold storage and house, for instance, fruits, vegetables and other foods that need refrigeration.

Today’s coatings for metal roofs can contain special “cool” pigments that reflect the light and heat from the sun, says Raimondo. This reduces the energy consumed by the air conditioning system, particularly in hotter regions of the country.

In one project, researchers examined energy consumption within two nearly identical schools in the Paulding County School District in Georgia. Both schools are about 90,000 square feet, are set with the same orientation to the sun, and have the same HVAC system. Each is covered with a standing seam metal roof system painted evergreen, one with the special reflective pigments, one with normal pigments. With this difference, the school with the special pigments saved $8,000 on its electric bills in one year.

Researchers at Oak Ridge National Laboratory estimated that if just 10 percent of the 82,800 school buildings located in EPA’s Regions 4, 5 and 6 (covering parts of the Midwest, Southeast and Southwest) switched to cool metal roofs, they would save $2.3 billion over 35 years.

Metal roofing systems also require minimal maintenance, Praeger says. Most just need to be hosed down once a year, and the gutters, downspouts and the like inspected. In comparison, the maintenance costs on other types of roofing systems can run as much as 20 cents per square foot per year.

To obtain all the energy-saving benefits metal buildings can offer, an energy design professional should be involved in the planning process from early on, Shoemaker says. That helps ensure that the professionals involved in the design and construction of a building are working together. For example, the inclusion of skylights in a metal roof will reduce the need for artificial light, which will impact energy use. This should be considered when designing both the lighting and HVAC systems.

The cost and energy advantages of metal buildings, along with the wide range of designs available, make them a valuable option for many building owners.

“The versatility of a metal building allows a building envelope that can be designed to be architecturally pleasing, meet the local codes requirements and provide energy efficient solutions to keep costs down,” Praeger says.

About the Metal Building Manufacturers Association 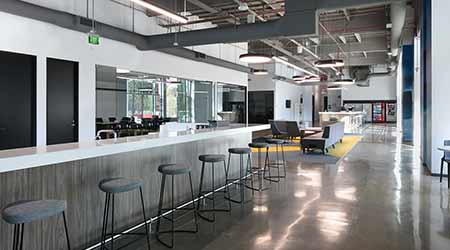