How One Hospital Improved Its Emergency Cooling Plan

As hospitals expand and upgrade facilities, facility executives should carefully review the capacity of the physical plant’s basic infrastructure. Power and cooling capacity in particular are critical to daily operations. A review of power and cooling systems should include a focus on emergency power planning.

Few hospitals can provide full cooling when operating on the emergency power system. Hospital management may not recognize how substantial the cooling load is, thinking that, to maintain cooling in critical areas, a few lights can be kept off elsewhere or temperatures might be allowed to rise in non-critical areas. This rarely makes a significant reduction in cooling loads because the largest loads are also the most critical. While full cooling is not required by code, prudent facility executives should consider the following key issues:

In the Real World

A recent power outage at a hospital in central North Carolina demonstrates the importance of an emergency power system operational plan and a cooling triage plan. Prior to the outage, facility staff at the hospital had expected to be able to run one 750-ton chiller on its emergency power system while providing all of the other life safety, critical and equipment loads. Staff tested this during a scheduled outage at 2:00 a.m. on May 2007. Given the loads at that time, the hospital determined that it could actually run two 750-ton chillers and associated pumps.

This outage occurred at about 1 p.m. on a hot, humid weekday. All HVAC controls were set to operate normally, and as secondary loop chilled water temperature rose, all chilled water coils went to the full, open position. Outside air dampers remained in normal positions.

Within about a half an hour, temperature and humidity began to rise noticeably. Soon, condensation formed on walls and floors. At this point, hospital engineers decided to start one of the 750-ton chillers manually. Unfortunately, the estimated cooling load at this time was approximately 2,500 tons. The chilled water temperature continued to rise. After about an hour, the second 750-ton chiller was started. The load on this hot August afternoon was far greater than the load during May’s early morning test, and when the second chiller was started, the in-rush current brought down the entire emergency power system and the 1 million-square-foot hospital went black.

The first step in developing an operational plan for an emergency power system is to create an accurate one-line diagram of the system. This should not be confused with risers. A one-line diagram should be an accurate depiction of systems, identifying key components and providing a means of troubleshooting them.

Next, do a detailed load analysis to measure actual loads on each automatic transfer switch. This allows for development of a breakdown of the emergency power system load.

A written protocol for operation of an emergency power system, along with the one-line diagram and better labeling of panels and distribution switchgear, will make it easier for staff to run the system under all normal circumstances. Clear labeling is important in emergency situations. Use meaningful nomenclature that indicates floor, substation and physical location within the electrical system, including emergency power system branch and panel, and voltage. Be sure panel labels match the one-line diagram.

In North Carolina, the hospital’s facility director and consulting engineers began by considering the impact of allowing temperatures in administrative areas to rise significantly. This would reduce the total cooling load by only about 10 percent. In the August outage, the system had the capability of providing only 750 tons of the 2,500-ton load (30 percent). In reviewing options for the control sequence, the team opted to completely shut off selected air handling units. In all other scenarios, the outside air intake would quickly result in unacceptable temperature and humidity conditions with no chilled water available. It was also deemed necessary to maintain the operation of all exhaust fans, necessitating intake of outside air.

In addition, the hospital decided that, at least in the beginning, the system would be implemented manually by the building automation system (BAS) operator. Shutting off air handling units effectively closes a space for occupancy. Many variables make it imperative to have human intervention, including time of day, case load and type, scheduled surgeries and outpatient procedures, how long the utility thinks the outage will last, and weather. Another reason the shutdown sequence was not programmed was concern that, if an automated shutdown sequence started, there would be no way to modify it to take into account seasonal variations, for example. With a written, but manual, shutdown sequence, the operator can get input from other sources and alter the sequence. If the operator is unable to get any input, there is a written standard operating procedure to follow.

How One Hospital Improved Its Emergency Cooling Plan 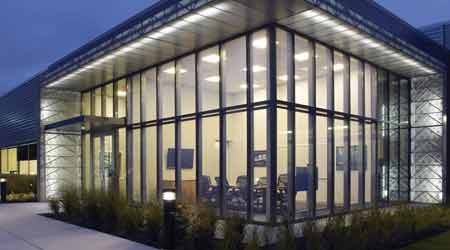