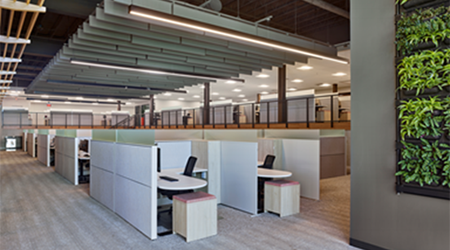 Located in the Plymouth Square retail shopping center in Plymouth Township, Pa., the newly renovated 45,000-square foot Brixmor office went from being a virtually unrentable basement space to a dream office. In addition to installing glass curtainwalls on two sides of the building to allow natural light into the space, the design team created an inviting environment its employees. Planned for postpandemic employee safety and comfort, the office was designed with touchless doors, larger work stations and alluring amenity spaces. In addition to making sure that the facility had good air quality, sound quality was also addressed with SONEX Linear Absorbers and SONEX AFS Acoustic Plaster System from pinta acoustic inc.

JKRP Architects had been working with the previous owner of the shopping center on an updated design for the building when Brixmor purchased it. Once a basement bowling alley, Brixmor wanted to transform the lower levels of the space into offices. To get as much light into the space as possible, JKRP Architects updated the design to add glass façades on the north and west sides of the building. And interior design firm, D2 Groups transformed three very separate levels into one split-level office space.

“All too often, clients don’t put acoustics in during initial design and construction,” says Josh Wilson, senior project designer from D2 Groups. “They wait until it’s a problem. Before the Brixmor space was remodeled, an acoustician from Metropolitan Acoustics in Philadelphia provided preconstruction testing and guidance on where acoustical treatments would be needed.”

The interior design team from D2 Groups contacted pinta’s representative, Jim Kolcun, at Applied Acoustical Group. After reviewing options, D2 Groups recommended SONEX Linear Absorbers to be installed above the workstations and in the cafeteria. The absorbers were suspended from the ceiling to create an attractive design element while maintaining the industrial open ceiling look. In addition, pinta’s SONEX AFS Acoustic Plaster Ceiling and Wall System was installed in the boardroom and other meeting rooms.

“We used pinta acoustic’s SONEX Linear Absorbers in another nearby project a few years ago,” says Wilson. “Brixmor’s team walked through that facility and were impressed by the look and function of the absorbers.”

“Our general contractor did the fit-out of the office we toured with D2 Group,” says Lucas Heverly, senior project manager, construction at Brixmor. “In addition to getting favorable feedback about performance from our general contractor and the occupants of the space, we liked the look of the baffles. When we were doing construction, the sound was reverberating off the glass curtainwalls, concrete and other hard surfaces. Once SONEX Linear baffles were installed, there was a noticeable difference with less echo.”

D2’s interior designer wanted a grid element hanging over the kitchen in the cafeteria. To build the grid, the team needed something constructable and wanted to use acoustic material to absorb sound reverberating off the hard surfaces in the space, including glass, polished concrete and exposed metal ceiling deck. Grey SONEX Linear Absorbers were used to create the grid-style pattern that blends well with the ceiling and creates an interesting design element. To absorb sound above the work stations, SONEX Linear Absorbers in 10- and 12-inch heights were hung in rows to create movement and interest without being visually overwhelming.

D2 was looking for ways to integrate the Brixmor brand that includes a distinctive X graphic. In the boardrooms and three other meeting spaces, the interior design team developed a ceiling design that played off the branding. The ceiling included recessed LED lights along a magnetic black bar. This lighting treatment was surrounded by SONEX AFS Acoustic Plaster System, which provides a monolithic look like gypsum board along with the added benefit of excellent sound absorption.

“We knew we needed an acoustical treatment in the boardroom and other meeting rooms, “says Heverly. “The boardroom has two glass walls and is large to accommodate a sizable group of people. It includes web conferencing equipment and speakers in the ceiling and walls. We needed to make sure that there weren’t any sound issues during important meetings and video conferences. SONEX AFS minimizes the reverberation in the room to maximize speech intelligibility.”

Across from another shopping center that the company owns, the new Brixmor office integrates two divisions into the same building for better collaboration and future growth. The office has been Fitwel certified and is being reviewed for LEED certification. 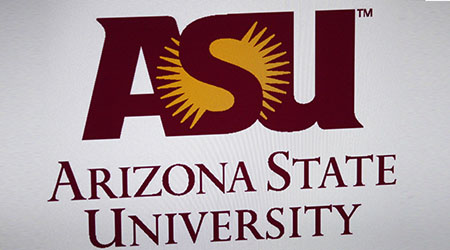 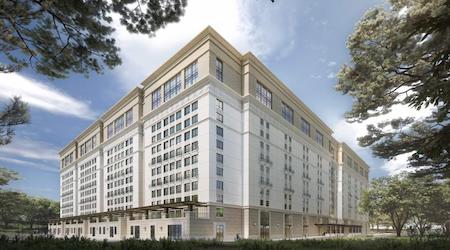 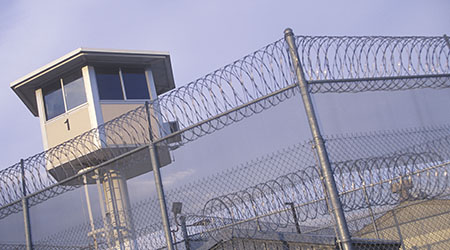 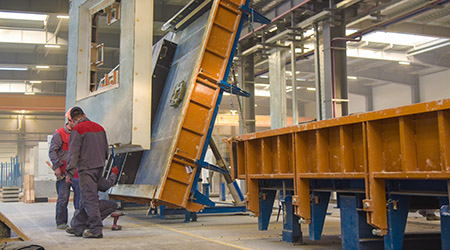