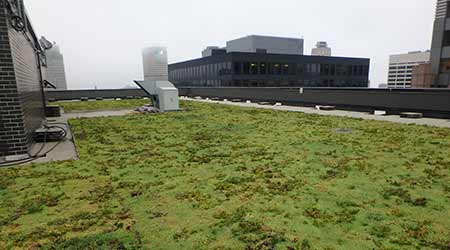 To give the green roof the best chance of success, the vegetated area is comprised of 12 to 16 species of sedum. When in bloom, sedums may have clusters of white, yellow or pink flowers.

1185 Avenue of the Americas in New York City is home to a world-class tenant roster and ranks as one of the most efficient commercial office buildings in the nation, earning it the Energy Star label. It also earned a LEED Silver rating from the U.S. Green Building Council. The 1.1 million sq. ft. office building is owned and managed by SL Green Realty Corp., the largest commercial landlord in New York City and a leader in urban sustainability. The building installed a green roof when the time came for a new roof.

“SL Green has an on-site team that manages 1185 Avenue of the Americas, which has 42 tenant floors and a 44th floor roof,” says Daniel Huster Senior Project Manager, SL Green. “The old (bituminous) roof was past its warranty. It had absorbed water, and we were showing signs of leaks in our mechanical room and the spaces below.”

Green roofs are uncommon at such heights. But SL Green already had two buildings in New York with green roofs but those green roofs are on setback roofs at much lower elevations. “The roof at 1185 is essentially rectangular, so this was an opportunity,” Huster says. “The floor plates spread the weight, and the green roof and pavers could cover roughly 4,500 to 5,000 square feet.” The entire roof covers a total of 14,200 square feet.

“We have a sustainability group that oversees our portfolio,” Huster says. “As part of our efforts, we look for opportunities to implement best practices and to operate at higher efficiency standards.” The sustainability group reviewed the costs and benefits of the project, the construction management firm answered their questions, and SL Green decided a green roof made sense for the firm and the tenants.

“When we originally put the RFP out for roofing renovation, we asked for the green roof as an alternative,” Huster says. “After the group considered all the advantages and then saw the pricing, we made a collective decision that it was worthwhile to pursue.”

The project faced typical day-to-day hurdles. One was verifying the wind loads for the green roof. The green roof was installed in five to six weeks starting August 2017.

The liquid-applied Kemperol 2K-PUR reinforced membrane system, which is self-flashing and installs directly to the deck, was selected for the project. It is a fully-adhered system that can withstand ponding water, so the roof did not have to be designed for slope, says Andrew Cucciniello, project manager, Consulting Associates of NY, Inc. A non-tapered rigid-styrene insulation board sits on top. The roof assemblies offer a 20-year warranty.

To give the green roof the best chance of success, the vegetated area is comprised of 12 to 16 species of sedum.

To address wind uplift significant weight was added to the assembly within the cups and the drainage elements. The engineered growing media is also a bit heavier than normal.

Another concern is wind scour — the plant’s ability to stay vital with continuous wind. “Trouble spots most often occur around the perimeter and at corners, where there are microcurrents of fast-moving or swirling air,” says Nick Smith, national account manager, ZinCo USA. “The conventional wisdom is that on a building over 500 ft. tall that is going to withstand serious wind, 24 hours a day, plants simply won’t grow at the perimeter and corners.”

Erosion is similar to the issue with scour. To combat erosion, the vegetated area was separated from the walkway deck in many areas with an aluminum angled-edge. The aluminum barrier acts as a separation for the way the wind moves. At the edge angle, the depth of the growing media must be exactly compacted in the cup wells to 3 inches plus. “A shallower depth may not be significant at the center, but at the edge you must have that specificity in quality control to safeguard against erosion,” Smith says.

Once the plants are down, a “jute net” is placed over the entire assembly. This erosion blanket is a biodegradable cocoa fiber. “It is really important on the perimeter that the jute net is wrapped around the vegetation and under the soil profile at full depth to make sure the plants have the best chance,” Smith says.

The drainage element was infilled with an aggregate to serve as ballasting. The mineral-based aggregates used also wick the water saved in the cups up into the growing layer.