When occupants understand how the space will benefit their needs — physically, psychologically, and productively — resistance to open office melts away.
By Greg Zimmerman, Executive Editor   Commercial Office Facilities
OTHER PARTS OF THIS ARTICLEPt. 1: How to Make the Open Office Plan Successful Pt. 2: This PagePt. 3: What Do You Want? How Listening to Occupants Yields SuccessPt. 4: How Open Office Space Must Address Acoustics, Thermal Comfort Pt. 5: Health and Wellness: How Research Influences Open Office DesignPt. 6: Examination of Corporate Culture Leads to Open Office Space Pt. 7: How To Maintain Flexibility in Open Office Plans

One of the most difficult parts of transitioning occupants to open space is overcoming their preconceived notions, says Walinski. People think they’re being shoehorned into a smaller space so their corporate overlords can save a buck. They’ve read the articles, heard the horror stories, and in many cases, are predisposed to hate the space before setting foot in it.

So why even bring up open office? Walinski says simply talking with occupants about what they want from their space, being attuned to what’s worked in the past, and remaining flexible are the most important parts of smoothing the process. “We see resistance until the day they move,” he says, explaining that about 50 percent of occupants are initially skeptical of the new open office. “But we explain the features and the science behind it. We tell them to give it a few days and let’s talk again.” 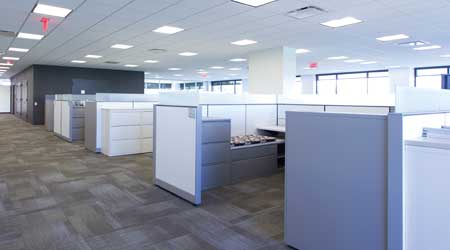 (In heads-down space, workstations are designed with minimal wall heights so there is access to daylight almost everywhere in the space.)

Talk to Walinski for just a few minutes, and it’s hard to imagine any occupant not seeing things his way. He’s passionate and cheerful, and one of his strengths is being able to explain what he’s trying to accomplish in an eminently relatable way. That includes concepts like Maslow’s hierarchy of needs, which Walinski frequently brings up — an idea that might normally cause an occupant to pass out from boredom faster than talk of BTUs and HVAC efficiency.

Maslow’s hierarchy of needs is a psychological theory that explains how to appeal to what’s important to people. Walinski explains to occupants how the open office plan, for instance, appeals to their biological and physiological needs because the office provides fresh air, natural light, and comfortable surroundings. Or, as another example, “You give them safety and stability by offering them private spaces and seated privacy without the feelings of isolation that arise in the high wall cubicle farms.” Essentially, he uses Maslow’s hierarchy to help them understand how the space really will benefit them personally and professionally.

“You’re never going to convince people with just logical arguments,” he says. “But instead, you give people a feeling of esteem, where they feel valued. If you’re making the effort to give people better space designed to spark creativity and collaboration, a large majority of people are going to be happy,” he says.

It’s a little bit of psychology, a little bit of common sense, and a lot of having earned occupants’ trust with past successes. Walinski sits on Munich Reinsurance’s diversity and inclusion council and is part of its innovation coaches program, both of which he says are critically important for his day-to-day job as a facility manager “because being part of these groups helps me get and share perspectives and information with my team so we can expand our ability to offer the most inclusive and innovative work environment possible,” he says.