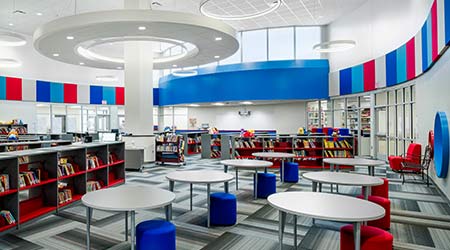 Both the Red Bluff Elementary School and Mae Smythe Elementary School buildings originally opened in the 1950s and improvements were made through the decades. After 60 years of use and withstanding hurricanes, the cost of repairing and renovating these campuses exceeded the cost of building new ones. The district received funding to embark on a multi-phase, comprehensive update to replace the aging structures with larger, newly constructed, contemporary buildings within their existing campus footprints.

Meeting all of the facilities team's criteria, the school district selected Rockf on acoustic stone wool ceiling systems as the basis of design for both schools, and for future PISD projects. Rockfon's ceiling systems for the PISD are provided by Action Gypsum Supply. Throughout the two new schools, Rockfon Pacific and Tropic acoustic stone wool, 2-by-2-foot ceiling panels were installed in Chicago Metallic 15-16-inch exposed suspension systems by BCI Drywall and Finishes.

The PISD's schools are located within the Houston metropolitan area, approximately 4 miles to Tabbs Bay upstream from the Gulf of Mexico. Hurricanes, tropical storms and humidity are as constant as the Texas heat. Rockfon's ceiling panels in Red Bluff and Mae Smythe schools are manufactured using stone wool, made from abundant basalt rock. The material is hydrophobic, meaning that it resists water. These ceiling panels maintain their rigidity at 100 percent humidity. They will not sag, stain or fall out of their suspension system due to moisture.

Stone wool naturally resists the growth of mold, mildew and potentially harmful microorganisms, without the use of added antimicrobials, biocides or fungicides. No fire retardant chemicals are added to the stone wool ceiling panels to achieve their Class A fire performance. Stone wool withstands temperatures up to 2150ºF, does not melt, burn or create significant smoke that could obscure a safe exit in an emergency event.

Further contributing to safe interiors and healthy indoor air quality, Rockfon's stone wool ceiling panels are UL GREENGUARD Gold certified for low VOCs. This stringent certification is recognized by several green building programs and standards such as LEED, WELL, Green Globes, CALgreen and the Collaboration for High Performing Schools. With small, developing lungs and higher rates of respiration, children are particularly vulnerable to chemicals and bacteria in the air. Reducing airborne contaminants lessens the risk for health concerns, irritability and loss of concentration.

In the classrooms, Rockfon Pacific acoustic stone wool ceiling panels deliver a high light reflectance of 0.85 LR. In rooms with exterior window systems, the ceiling panels maximize the use of natural daylight. Where additional illumination is needed, the ceiling suspension grid system easily incorporates light fixtures and the white panels make efficient use of their electric lighting.

Regardless of the source, the ceiling panels' bright white surface reflects 85 percent of the light into the rooms' interior. This diffused lighting minimizes glare, allowing students to better see the high-tech screens and monitors without squinting and straining their eyes.

High light reflectance and control can be especially important for students and teachers in sensory rooms, dyslexia and speech therapy rooms, and other special education services. To avoid distractions, these rooms do not have exterior windows and are located within schools' interiors.

A good acoustic experience also is essential in improving concentration, focus and clarity for all students. Along with enhanced visual comfort and a high light reflectance, Rockfon Tropic ceiling panels also provide high sound absorption in the libraries, cafeterias, common areas and hallways.

At Mae Smythe Elementary's library and cafeteria, Rockfon Tropic panels seemingly float in suspended ceiling clouds and islands above the sound-reflective tables, floors and other hard surfaces below. In the library, hoop-shaped ceiling clouds encircle large, LED ring lights greeting students to book collections and reading areas. In the cafeteria, the ceiling islands' grid pattern resembles a Mondrian painting, establishing the rectangular format as a whole structure and within smaller, inset, separated components.

Enhancing the bright, clean, modern appearance of the schools' ceilings, purposeful shifts in the grid pattern offer visual breaks and wayfinding cues. For example, standing on the first floor of Mae Smythe's two-story entry lobby, the ceiling grid aligns with interior wall of the reception area, and standing on the second floor, the upper level's ceiling intersects at diagonal to match with the orientation of the hallways.

At Red Bluff Elementary, the ceilings uphold a symmetrical, monolithic ceiling grid pattern throughout the entire school and use bold bursts of color to define the interior spaces.

In addition to their reliable day-to-day performance, Rockfon's ceiling systems are durable and resilient with a long lifespan. Backed with a warranty of up to 30 years, the stone wool ceiling panels require minimal maintenance and can be cleaned without harsh chemicals. When future updates are needed in the schools' lighting, HVAC, audio-visual or security systems, the ceiling grid allows individual panels to be conveniently removed for easy access to the plenum. 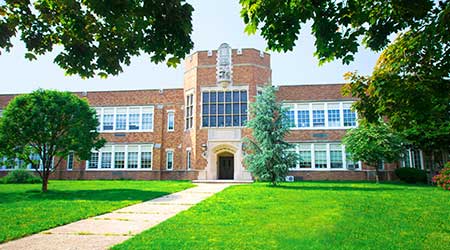 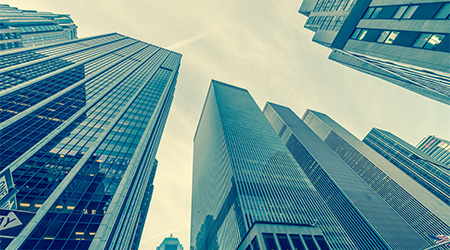 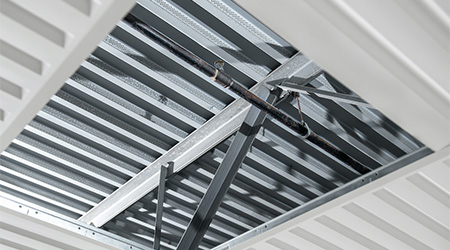