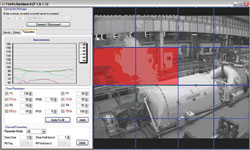 The video-detection system uses standard closed-circuit TV cameras linked to a self-contained processing system, which is capable of recognizing smoke and flame patterns within the video image. The system uses software algorithms to identify the specific motion pattern of smoke and fire from up to four cameras simultaneously, while ignoring other on-screen movement patterns. When it detects fire or smoke, the system alerts the operator at the operating terminal and at an unlimited number of remote locations. The system is ideal for applications where traditional smoke-detection technologies might be impractical or inefficient, such as large open areas, high ceilings, or high airflows that can prevent smoke from reaching a spot-type detector.