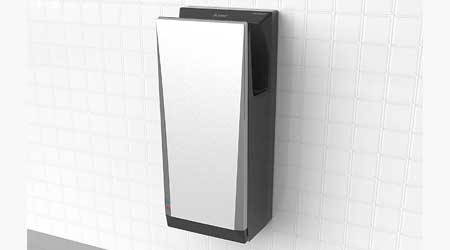 Mitsubishi Electric has launched a new model in its technology-leading Jet Towel hand dryer range. Called the Jet Towel Slim V9 it offers improved performance in many areas, including a 2dB reduction in the already whisper quiet noise level to 56dB, stronger front and back panels for greater impact resistance.

The original Jet Towel was launched in Japan in 1993 and represented a completely new way to dry hands. It dried ten times faster than existing solutions, used very little energy and was ultra quiet in operation. Further it redefined hygiene performance, was reliable and ergonomic in use.

Since then the design has gone through several generations, keeping Jet Towel at the forefront of design and innovation. The latest design, the Slim Series, is the ninth iteration of the evolution and builds on this pedigree to provide a smart choice for bathroom installations.

The operating principle of the Jet Towel is based on the generation of two thin sheets of high speed air that simultaneously wipe water from both front and back surfaces of hands placed into the drying chamber. The drying time is from only 9 seconds a third that of conventional hot air blower dryers.

The fast operation and relatively small amount of air flow means energy consumption is far lower than other dryers and the laminar flow means extraneous noise is not generated. The 56dB noise level is attained partly due to the special wave-shaped air nozzles that minimize interference between the air flows.

Moisture from the hands is collected in a drain tank, the neatest and most hygienic option as it means bacteria are not set free into the surrounding atmosphere by being blown around the room in a hot air stream as they are with other dryers. Additionally Jet Towel is manufactured using a silver ion antimicrobial material, preventing bacteria growth. In addition to white, Jet Towel Slim is available in black and silver. The silver option is ideal for office buildings and shopping centres, while the black helps set an ambience of sophisticated elegance in restaurants and theatres.

The speed of the drying air is approximately 100 metres per second, so that the Jet Towel Slim series works far faster than conventional warm air dryers, which is particularly important in situations where there are likely to be surges in use, such as during intervals at conference centres, lecture theatres and music venues. In fact the Slim series has two speed settings, ‘standard’ and ‘high’, the latter of which can be selected for intensive use installations.

The drive motor at the heart of every Jet Towel has been optimized for airflow duties to ensure low energy consumption. It consumes only 550W-1240W of power, hence its low running costs.