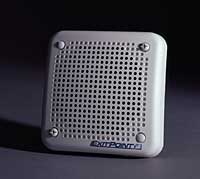 Initial test trials show evacuation times in smoky conditions are reduced by up to 75 percent and up to 35 percent when smoke is not present. ExitPoint is capable of playing a recorded alert message, which instructs the occupants of the action to take as they approach an ExitPoint device, including “stairs up,” “stairs down,” “area of refuge” and “exit here.”

The device has a total of 15 single and combination language choices, including English, English/Spanish, and English/French. Between voice instructions, ExitPoint’s integral audio amplifier produces a pulsating noise consisting of broadband low, mid and high sounds. The broadband noise makes it possible for those in the building to determine the location of the sound, even if they are unfamiliar with the building or if the exit signs are obscured by smoke. There are four pulse patterns that can be used to create an egress pathway out of a building and to mark perimeter exits.