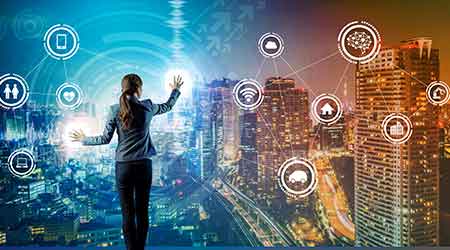 By Alan A. Varghese

Smarts are coming to everything; consumers are now familiar with smart phones, smart cars, and smart homes. What about commercial buildings and infrastructure?

Buildings can be considered our “second skin” since we spend about 80 percent of our lives in them. Up till recently, buildings were considered a depreciating asset, but is it possible that buildings of the future will be a strategic asset? That they will operate in an intelligent way and be productive and monetizable assets for facility managers and real estate owners? Is it possible that the traditionally conservative and risk-averse building and construction industry would leverage the latest technologies such as the Building Internet of Things (B-IoT), Big Data, cloud computing, data analytics, deep learning, and artificial intelligence for the benefits of saving energy, reducing operational expenditures, increasing occupancy comfort, and most important, meeting increasingly stringent global regulations and sustainability standards?

AHR Expo 2019 provided a perspective on these questions. This annual event enables leaders in the industry to network, share best practices, and get up to speed on the latest equipment and solutions. This year’s Expo drew more than 65,000 attendees and 1,800 exhibitors, with almost 500 of them international exhibitors from 35 countries. Here are three takeaways:

1. One continuing trend is towards energy reduction, de-carbonization, and lowering greenhouse gas emissions; an increasing number of companies are working on B-IoT connected nodes, devices, and gateways that will offer intelligence about the building’s operations, and especially its energy envelope. According to the U.S. Energy Information Administration, commercial buildings as a sector consume as much as 19 percent of total energy consumption; this equates to almost 19 quadrillion BTUs.

If we look towards Europe, the numbers look very similar: Commercial and residential buildings are responsible for 40 percent of total energy consumption, and 36 percent of carbon dioxide emissions. Currently about 35 percent of the buildings in the European Union are over 50 years old, and almost 75 percent of the building stock is energy-inefficient. Only 0.4 percent to 1.2 percent (depending on country) of EU building stock is renovated each year; thus it is imperative to enable fast and easy deployment building automation technologies in order to move the needle on energy consumption and carbon emissions.

2. A second clear trend clear at AHR was digitalization. Everything that can be sensed and measured — air pressure, humidity, light, motion, presence, temperature — can be used to make adjustments to reduce energy consumption and to better suit occupant preferences. Unlimited cloud computing and storage accessible not just to large companies but also to small startups is changing the rate of innovation in the built environment. Buildings that currently do not have a building automation system, could skip that step altogether and take their business direct to the cloud. The advantage of cloud computing is that automation can be performed in a holistic manner using a consistent set of algorithms, tools, and dashboards on a portfolio of different properties belonging to the same landlord or real-estate firm.

3. Though cloud computing is well-known in the industry, edge computing is not as well known. Edge computing refers to the processing and analytics running on an “edge” device such as a gateway or server, or sometimes in the sensor module itself; it is the demarcation point between the IoT nodes in the building and the cloud or company’s data center. The advantage is that any data sent to the cloud can be a smaller subset of the computations, or a summary of the analytics. This consumes lower network bandwidth, and end-to-end latencies are lower which obviously leads to faster response times. Gateways can range from as basic as a Raspberry Pi board to powerful servers that are capable of high computations, complex analytics, and the ability to handle large numbers of endpoints and withstand extremes of temperature and vibration. There are considerable concerns about security with the advent of B-IoT as the number of connected devices increase, the flow of data inside buildings becomes more complex, and the operational and IT networks of a building start to converge. Edge computing, by keeping information local, better preserves the privacy and security of building and occupant data.

One example of edge computing is SmartServer IoT from Echelon, now part of Adesto Technology. It is an open, programmable edge server and field controller for commercial buildings with APIs based on IoT Access Protocol that can communicate data from building controllers, meters and sensors to web services and the Cloud. This can be done securely and efficiently without needing special ports to be opened through a building firewall. The product can work with BACnet, LonWorks, and Modbus building automation protocols, as well as with building management systems, remote clients, and cloud applications from any vendor. Keeping in mind what I brought up about de-carbonization , Adesto has a collaboration with IBM to offer a predictive energy management solution for building managers through artificial intelligence algorithms and analytics running on IBM’s Watson IoT platform.

The AHR Expo made me reminisce a bit. My education was in electrical engineering and digital signal processing, and I have spent the last 25 years in the fields of wireless, semiconductors, broadband, and automotive. My dad in contrast was a mechanical engineer and for 45 years worked in HVAC, right from the early days when pneumatic controllers were used for thermostats and valves. In the past when he would talk about boilers, chillers, compressors, and expansion valves, I would try to hide a yawn and think mechanical engineering was somewhat uncool compared to electrical engineering. But that has changed: The products and technologies at AHR Expo 2019 were very cool.

Alan A. Varghese has 25 years of experience in the wireless, semiconductors, IoT, cable and optical, automotive, and smart buildings and cities segments. He is currently an industry and technology analyst.