First of a three-part article on how to get started with the building internet of things.
By Rita Tatum   Building Automation
OTHER PARTS OF THIS ARTICLEPt. 1: This PagePt. 2: Data, Cybersecurity Are Key Parts of Building IoT Business PlanPt. 3: How To Choose Between Start-Ups and Established Companies

The rapidly growing number of Building Internet of Things (IoT) options in the marketplace presents a complex challenge to facility managers. Digital technology and building systems exist in two different worlds. Technology changes with the speed of smart phones. Today’s hot technology may not be around in five years. Meanwhile, the building and many of its systems are going to be operating for decades.

In addition, Building IoT offerings often do not fit into traditional building system categories and may have extra fees associated with maintenance and updating. They also may operate on the enterprise’s information technology (IT) network, blurring the roles of facility manager and computer geek.

To complicate matters, many promising Building IoT offerings are from start-up companies.

With all the uncertainty, some facility managers may be tempted to ignore the whole subject and concentrate instead on another of the many challenges that confront them every day. But ignoring the Building IoT won’t make it go away. Today’s building occupants expect their work environments to be as connected as their smart phones and tablets. Savvy facility managers realize that staying competitive requires converging the two disparate worlds of facility management and information technology.

The Building IoT holds a wealth of opportunities for facility managers. Starting at the smart sensor level through a common Internet Protocol network to cloud-based analytics and diagnostics software applications and back to the sensor, the Building IoT encompasses a wide range of new technology choices that facility managers should be aware of.

Increasingly, staying competitive means embracing the Building IoT concept. But how can facility managers evaluate the options it presents? And how should Building IoT be implemented? What about cybersecurity? How should potential vendors be evaluated? It’s no wonder that facility managers may feel that they need a global positioning system to find their way in this new landscape. 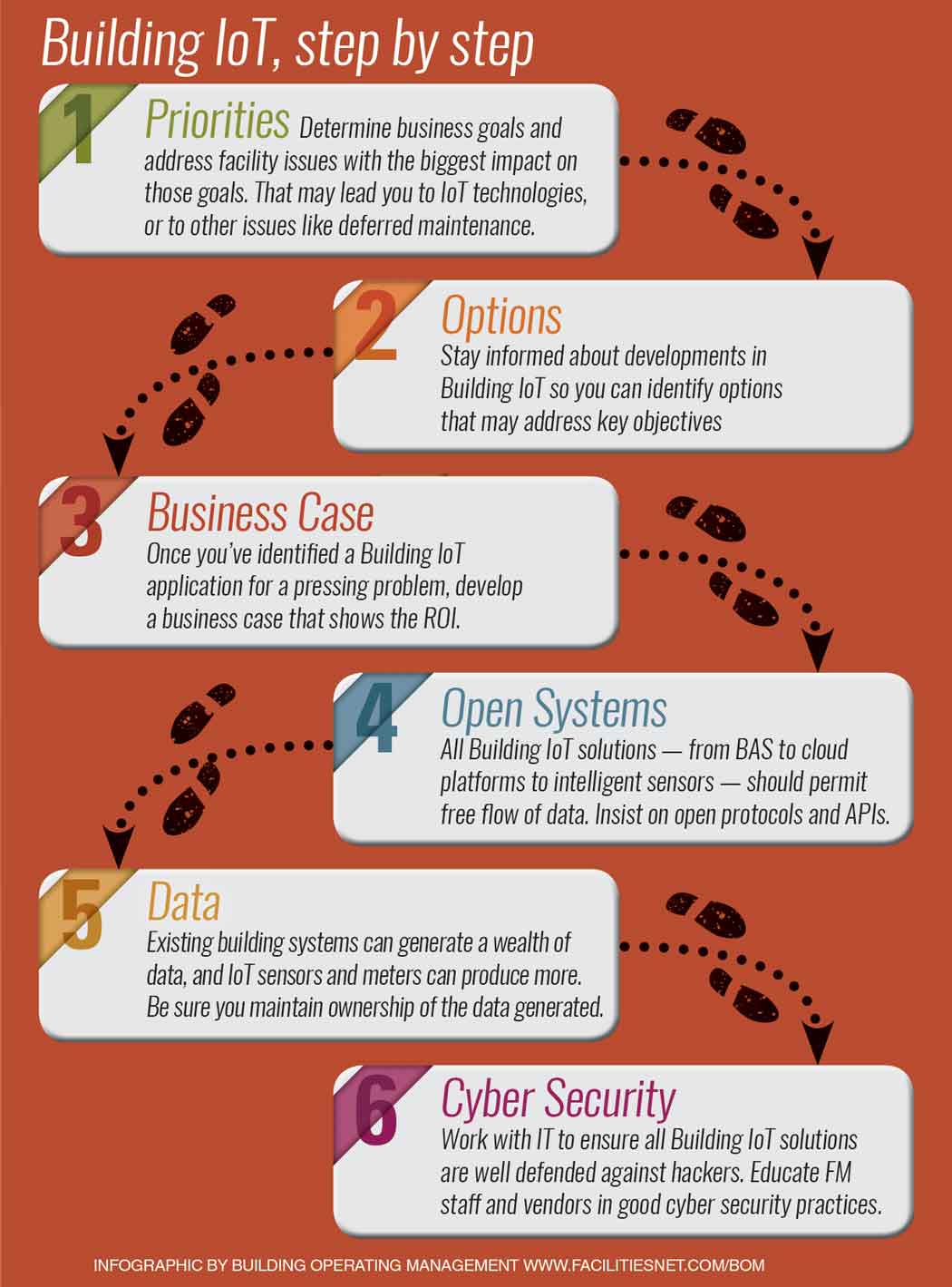 IoT is a concept
The place to start is with the basics. “Building IoT is a combination of hardware, applications and the ability to connect all of that together,” says Paul Oswald, managing director of CBRE | ESI. “IoT is a concept, not a piece of technology. Building IoT is the ability to take edge devices and connect them into an environment to enable applications and solutions via the data collected from the sensors.”

In addition to the smart sensora and controllers inside the building, Oswald includes mobile devices such as smart phones and tablets. “Mobile devices are part of the eco-system that helps enable an IoT solution,” he explains.

Modern building sensors, controls, and automation systems that use open, interoperable standards and Internet protocols are broadly available from most established building automation systems companies today. BAS companies offer interoperable models in addition to their proprietary products. Facility managers who have updated their BAS from proprietary to open standards already are well on their way.

Kurt Karnatz, president of Environmental Systems Design, says he believes facility managers interested in the building IoT should start incrementally with an open standards and protocols infrastructure, making sure that it is scalable. Then, as apps and equipment are added or updated, they can be integrated into the network. A strong business case and ROI should be prepared for each new Building IoT device or app, suggests Karnatz.

Facility managers need to make sure their BAS and corporate IT solutions have the resiliency and redundancy to handle the massive amounts of unlocked data that Building IoT creates. Building IoT solutions are moving away from standalone systems toward a converged network.

This is the eighth article in our ongoing Building Internet of Things series.