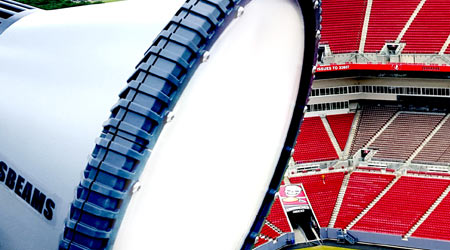 September 2, 2016
By Dave Lubach
Lighting
With the NFL regular season preparing for kickoff later this month, fans’ focus turns to quarterbacks, wide receivers and fantasy football. In the facilities world, the focus moves off the field to the massive sports venues that host teams and crowds that sometimes swell to more than 100,000 people every weekend.

Those spectators, and the players on the field, are demanding a higher quality experience every time they step foot into the stadium. And one of those areas stadiums are starting to address is the lighting systems.

NFL stadiums are taking the step to making LED lighting as common for the facilities as end zones and goal posts. Raymond James Stadium, the home of the Tampa Bay Buccaneers, recently installed Sportsbeams LED Stadium 1500 fixtures for its field lights.

“We went through four or five lighting manufacturers before making a decision,” says Chris Jacquot, Director of Facilities. “We found Sportsbeams to be the best quality light.”

Among the other benefits of using LEDs in a competition setting is to reduce the glare that can possibly cause players to lose a football or popup in the lights. The 1500 features a single-optical system that reduces that glare possibility. Additional features include instant restrike to eliminate lighting blackouts, providing flicker-free film and video capture at any frame rate, including super slow-motion, and multiple remote command options for enhancing fan-experience lighting effects.